In 2012 I started producing a concept record that never materialized in the ideal fashion I would have hoped for — perhaps this was just as well. Much elaboration went into it, every track was supposed to be like a Lord of The Rings movie.

But this was too much for what we were doing at the time. We were already releasing a plethora of group and solo albums.

This project was an Ambient Abstractions quasi-thematic supergroup called the Mole People.

The idea for the Mole People came not only from the cheesy flick but also the entire idea of being underground, perhaps in a more literal sense.. as well as metaphorical.. It was to be a classic Hero's Journey, in which the protagonist (in this case the listener) goes into the underworld, meets the inhabitants, and emerges with an even greater understanding.

This was where the thinking was at the time. Sort of like AA's answer to Army of the Pharaohs. Except maybe more story driven.

A little over a year later the instrumentals were complete. By this point a couple of the original beats were scooped up and used for other purposes, but the original flow of the album remained the same.

Interest in the project simmered and fizzled for several years, and only one track actually ended up being recorded. Which is not to say that Mole People will never drop material. Only time will tell when and in what ways the Mole People will re-emerge..

For the present I decided to preserve those instrumentals here. Throughout the past 5 years I've dropped little snippets here and there, but I figured it was time to archive those tracks as they were originally recorded ("in situ" as the archaeologists would say), including some bonus flavor.

Making music in 2012 was like a lightning rod — many great things came to fruition. The Mole People was a rush idea that was too big for its britches. In an alternate universe or my own imagination it would have popped off simultaneously with everything else that was happening at the time, which in reality was an impossible task. It was simply too much to ask. Of anyone.

I hope you enjoy these beats, for whatever they're worth. The Mole People represents many things. The fear of the unfamiliar. The process of going through and integrating experience. And the undaunting courage of those willing to make the journey.

I recorded most of these beats on an MPC 1000 through a Mackie DFX series live mixer to an E-MU Systems PCIe card to Cubase 5. Minimal mixing was done. A couple beats were made on FL Studio. It was planned to incorporate further media samples from various sources (documentaries, etc.) as the songs begun to take further form, combined with effects. Madlib was an inspiration here, especially with the Quasimoto Unseen album.

No additional remastering was done.

Lastly, I dedicate this record to Lake Merritt and psychedelic mushrooms.

I sort of feel like these beats were a kind of magnum opus, at least at the time and for the period in which they were made, as "incomplete" as they are. 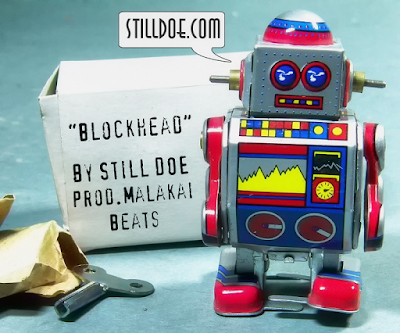 Head over to the brand new Still DOE website, stilldoe.com. On the main page look for the audio player and peep the exclusive track 'Blockhead' from the upcoming album Elevator Music For Different Dimensions.
Posted by malakai beats at 10:24 PM 0 comments


I felt like it was time to write a piece like this, after I had finally (at least somewhat) seriously attempted and succeeded in organizing the crates. 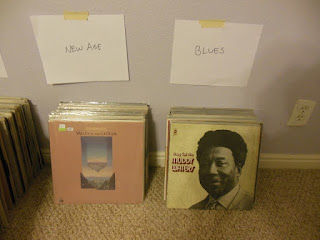 I just decided to do it by genre.  Nothing is in alphabetical order, but I made an effort to group all albums by the same artist together, so you might come across a stretch of James Brown in the soul section sandwiched between a Marlena Shaw and an Isaac Hayes record.

Sometimes it's hard to decide what genre something is, so I decided to group a bunch of stuff together, like all 'instrumental' music (classical, orchestral, easy listening).  Yea.. I have a lot of those records.  If I was going to start getting rid of stuff it would probably begin with far too many wack Lawrence Welk albums and other items I would just blindly grab up back in the day on my 10 for a dollar steeze. 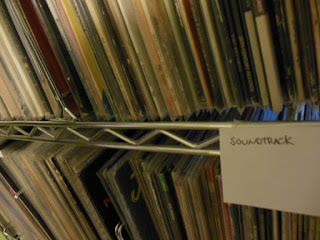 Amassing a bunch of records has taught me a few things.  First is to not pack them too tightly, they need room to breathe.  Ring wear is a common occurrence for this type of storage.  More obvious things, don't stack them and store them, because that's how you get "tacoed" or warped records.  Having some record store grade vinyl sleeves is also recommended to protect the cover art and cardboard against the elements.  I've had issues with moisture in the past, mold starting to form on records etc.  That kind of problem can creep up unexpectedly.

When cleaning records, I use an old groove brush to get most of the dust off.  If liquid is required (caking or grime),  I use a solution of roughly 10:1 distilled water and alcohol (reagent chemical grade works best) and 1 drop of Triton x100 or similar surfuctant in a spray bottle.  Microfiber works fine.  I have an old record cleaning machine but I never use it, I prefer to just clean records by hand if I have to. 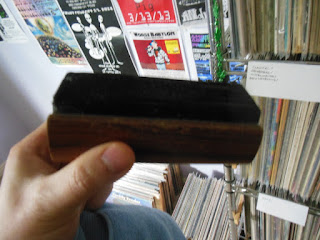 As for keeping the stylus clean on a turntable, these days I lean more toward keeping it dry and using the Magic Eraser technique.  Basically you cut off a little wedge and "drip" the needle into the eraser.  See various Youtube videos and articles for more info.

Someone recently asked about the shelves I use.  These are your standard deal units you can find at Home Depot for between 20 bucks and 40 bucks.  Get the ones that include the cubbie dividers.  The only modifications I made were closing off the ends of the shelves by fastening small boards via zip ties.  It's a kind of halfway elegant solution but it works. 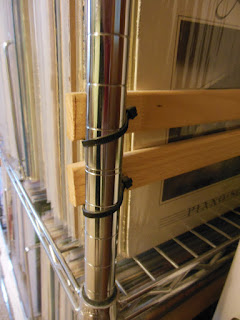 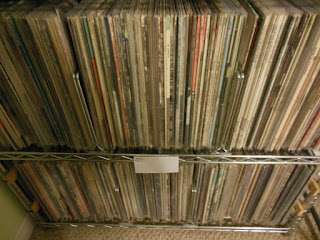 The idea behind the dividers is that, like it or not, the records are gonna lean one way or another depending on where more of the weight is coming from.  As with not overcrowding the albums, it's important to keep groups or 'cubbies' of them equally weighted, more or less.  Without the dividers, one can see how an entire shelf would be swaying to one side with the records closest to that side taking on the weight of all the other records.  Overtime, this is how warping can occur.

If I really wanted to, I could go further in the organization and divide records within each genre alphabetically, which would be the next logical step.  But I feel no real need to, I can now more easily find jazz records for example, or new age albums.  I know where all the spoken word, comedy and other miscellaneous types can be found.

Not knowing where anything could be found was alright for a while, anytime a record was taken out it would just be put back in another random spot.  I would basically 'dig' my own crates when making beats and looking for samples.  Now it seems like a good idea to be able to find stuff in particular more easily.  All earlier attempts to do organization of any kind had failed, or just seemed daunted and too involved, so finally taking the several hours to sort through every record to find a place for it now feels like a worthwhile accomplishment.
Posted by malakai beats at 10:18 PM 0 comments